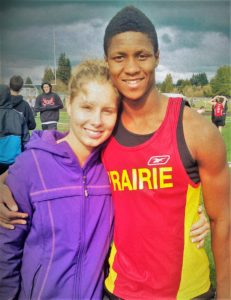 My black son and my white daughter were guides at the same tourist facility. They were also exercise partners in some sort of grueling routine that produced amazing calf muscles—in both of them irrespective of their different DNA. So, when people doubted the two were siblings, the unmatched pair would flex the back of their leg and point out the obvious similarities.

“I mean, sure we have different fathers,” one would admit.

“And different mothers,” the other conceded.

Did they get tired of people’s comments?

Maybe when it wasn’t fun.

But they could have avoided such conversations by pretending to be mere acquaintances.

You can’t pretend to be mere acquaintances when you parent in public.

So how do you deal with intrusive questions?

Some things for you to consider:

Protect your children, but also remember, children are watching you.

If you act irritated, annoyed, and bothered, your children will pick up on this feeling. They may interpret those emotions as indicating something is wrong with adoption, specifically trans racial adoption. If you act with calm, deflecting the insensitive rudeness with dignity –and when possible humor–your child will grow up to learn the same.

I don’t know how I acted for my children to grow up and insist people take a moment to exam the two siblings very fit and muscular extremities. Maybe they learned dignity and humor on their own, but I’ll take it.