Twenty years ago we started a family by picking up a 5-pound little girl who needed us or we needed her.  It happened so many tears and laughs ago; I can’t remember who needed who.

She had similar coloring to ours. And she was so much fun we went and got another even though his skin pigmentation was different, but not as different as the next two boys we brought into our house.

If you’re reading this, you either have a family that doesn’t match or are considering such a step.  You might even be reading this to glean a little knowledge and wisdom from an expert who has been down the trail you’re thinking of going. Uh, yeah, I’ve been down the trail. I’m still on the trail. But don’t hold out for wisdom. All I can tell you for sure is that matching DNA doesn’t make you a family.  Inside jokes do.

That’s where the bonding is.

My children have a joke they repeat frequently. Several years ago they watched the movie RV. IF you haven’t seen this stupid film here’s all you need to know. The star, Robin Williams, decides not to take his family to Hawaii, instead he rents an ugly RV and then embarrasses his children as they drive cross country.

During a particularly upsetting point he rushes toward the family and says enthusiastically, “Good news,”

When I do something stupid, one of my children will turn to her siblings and say, “Good news.”

When their dad started losing his hair, “Good news,” the boys told each other.

When I get varicose veins, another child will motion toward the blue spider veins on my calf and sympathize by saying, “Good news.”

That particular inside joke is getting old.

I thought family photos would be a bonding experience, made an appointment with a photographer and asked the kids what color scheme they would like.

“I think we should be allowed to show our individual and unique tastes,” my oldest daughter suggested “We’ll all wear what we want.”

“I have a new shirt,” 11-year-old Rae chirped excited about the prospect of wearing clothes I told her should be saved for school.

“It’s ugly,” Tyson said with more conviction than you would expect from a brother who hadn’t even seen the new addition to his sister’s wardrobe.

“I’m good to go, Mom,” Charlie said cheerfully when I asked if he’d like something new and unstained for this picture that would be a permanent record of our family unit. “It’s all good.”

He wore a white undershirt to the photo shoot.

Tyson prefers black T-shirts with no collar, no buttons, and no pocket. Definitely no pockets.

“That’s like just weird having a little pocket on your chest,” Tyson muttered. “Like what you going to stick in there, a little bottle of nose drops? Gross.”

Justin wanted to go shopping for something new. Tyson warned him not to get pockets.

Roxy will wait and see what “mood” strikes her after she’s done her hair.

The photographer’s smile looked more insincere than the ones the kids were displaying to the camera. They were standing in a rigid line with about six inches between each of them.

“Get closer together,” he told them waving an arm.“You on the end, in the white T-shirt. Put your hand on your sister’s shoulder.”

“What for?” Charlie asked.

“Right there on her shoulder,” the man behind his camera ignored my son’s question. 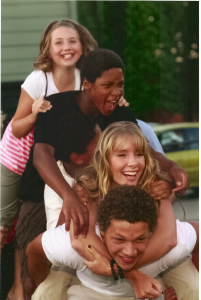 The 15-year-old laid a stiff hand on his sister’s shoulder.

“Don’t pinch me,” Tyson yelled from the other side jumping away from the group.

“I was putting my hand on your shoulder,” Roxy said innocently. “Because we’re a happy family that loves each other.”

“Love me without touching me,” the 13-year-old threatened.

The two youngest stood grinning stiffly at the camera. The camera man snapped a couple pictures.

“Would you like something a bit more relaxed,” he finally suggesting looking around the park.

“See if Charlie can still hold us all up,” someone said.

In an enthusiastic scrabble, they all tried to balance on the football player’s back. He can hold them all; they just aren’t particularly stable.

“Let’s do a pyramid,” one of the kids said and within ten seconds they had agreed that the boys would be the base and the girls would climb on top. And that’s the picture that will hang on our wall this year.  Because DNA doesn’t matter. If you’re tired of inside jokes—try a pyramid.

Watch for my unwise advice in this blog on a weekly basis. Let me know how you’re doing on this trail.